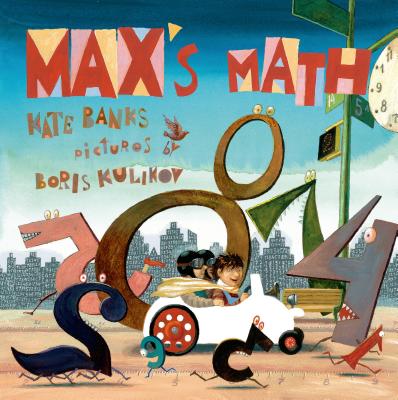 Max and his two brothers hop into a car and go looking for problems they can solve. They cruise down highway number 4 on their way to Shapeville, but they see an abandoned number along the way. Is it a 6? Is it a 9? And what's it doing on the side of the road? Once the trio reach Shapeville, there's another problem: a flood washed away all of the squares. Max and his brothers show the town that putting together two triangles will bring their shapes back together, and then they follow the residents on a trip to Count Town, where they put the missing number back in its place in the countdown to a rocket's blastoff.

This title has Common Core connections.

Kate Banks has written many books for children, among them Max’s Words, And If the Moon Could Talk, winner of the Boston Globe–Horn Book Award, and The Night Worker, winner of the Charlotte Zolotow Award. She grew up in Maine, where she and her two sisters and brother spent a lot of time outdoors, and where Banks developed an early love of reading. “I especially liked picture books,” she says, “and the way in which words and illustrations could create a whole new world in which sometimes real and other times magical and unexpected things could happen.” Banks attended Wellesley College and received her master's in history at Columbia University. She lived in Rome for eight years but now lives in the South of France with her husband and two sons, Peter Anton and Maximilian.

Boris Kulikov is the critically acclaimed illustrator of many children's books. His work includes Papa's Mechanical Fish by Candace Fleming; W is for Webster by Tracey Fern; and the Max's Math series, written by Kate Banks.He lives in Brooklyn, New York.

“Max is back in the fourth in his eponymous series of concept books . . . Kulikov's rich, textured paintings are filled with details that extend the story and invite young mathematicians to stop and examine Max's fantastic world . . . Bold. MAXimum fun!” —Kirkus Reviews

“In the fourth story about Max and his two brothers, numbers and shapes take center stage instead of words.” —School Library Journal