Market Square: A History of the Most Democratic Place on Earth (Paperback) 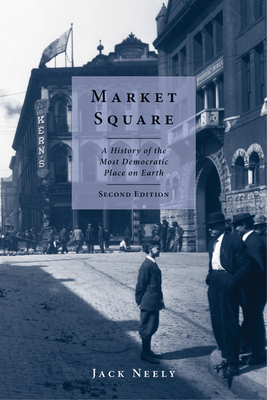 By Jack Neely
Email or call for price
Special Order

Conceived in 1853 as a canny real-estate scheme by two young investors expecting to get rich off the idea, Market Square came to be Knoxville’s most public spot, a marketplace familiar to every man, woman, and child in the area. By the 1860s, it was the busiest place in a burgeoning city. In a town that became bitterly divided by politics, race, and background, Market Square became a rare common ground: a place to buy all sorts of local produce, but also a place to experience new things, including the grandiose Market House itself, considered a model in a progressive era. Beset by urban blight by the mid-1900s, Market Square had become more of a curiosity than a point of municipal pride, and the neighborhood declined. After years of controversy, the city razed the Market House and struggled to modernize the old Square itself.

This second edition is packed with more information about the colorful history of this eccentric place, including details about its African American heritage, the surprising origins of a recent international bestseller, and a much fuller account of its present-day resurgence as an example of vigorous urban revival. Through a combination of public and private efforts in the 21st century, Market Square seems to be returning to its original diverse spirit, suggesting why, on a good day, it can resemble—as a reporter described it in 1900—“the most democratic place on earth.”

Jack Neely is the award-winning “Secret History” columnist for Metro Pulse, Knoxville’s weekly newspaper. He is the author of From the Shadow Side and Other Stories about Knoxville, Tennessee, and, with Aaron Jay, of The Marble City: A Photographic Tour of Knoxville’s Graveyards.

Jack Neely is the award-winning Secret History columnist for Metro Pulse, Knoxville s weekly newspaper. He is the author of From the Shadow Side and Other Stories about Knoxville, Tennessee, and, with Aaron Jay, of The Marble City: A Photographic Tour of Knoxville s Graveyards.