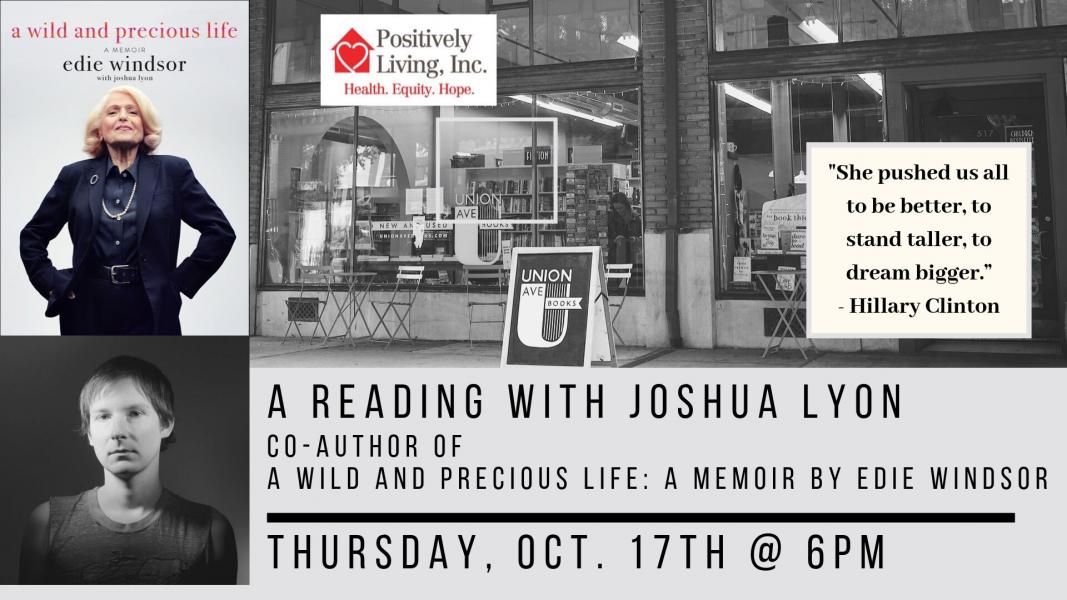 Join us for a reading Thursday, October 17th at 6:00pm with author Joshua Lyon for the book A Wild and Precious Life: A Memoir by Edie Windsor .

Edie Windsor became internationally famous when she sued the US government, seeking federal recognition for her marriage to Thea Spyer, her partner of more than four decades. The Supreme Court ruled in Edie’s favor, a landmark victory that set the stage for full marriage equality in the US. Beloved by the LGBTQ community, Edie embraced her new role as an icon; she had already been living an extraordinary and groundbreaking life for decades.

In this memoir, which she began before passing away in 2017 and completed by her co-writer, Edie recounts her childhood in Philadelphia, her realization that she was a lesbian, and her active social life in Greenwich Village's electrifying underground gay scene during the 1950s. Edie was also one of a select group of trailblazing women in computing, working her way up the ladder at IBM and achieving their highest technical ranking while developing software. In the early 1960s Edie met Thea, an expat from a Dutch Jewish family that fled the Nazis, and a widely respected clinical psychologist. Their partnership lasted forty-four years, until Thea died in 2009. Edie found love again, marrying Judith Kasen-Windsor in 2016.

A Wild and Precious Life is remarkable portrait of an iconic woman, gay life in New York in the second half of the twentieth century, and the rise of LGBT activism.

EDIE WINDSOR was an American LGBTQ rights activist and a technology manager at IBM. She was the lead plaintiff in the Supreme Court of the United States case United States v. Windsor, which successfully overturned Section 3 of the Defense of Marriage Act, which provided that the term "spouse" only applied to marriages between a man and woman—a landmark legal victory for the same-sex marriage movement in the United States. In 2013 she was the Grand Marshal of the New York City LGBTQ Pride March and the runner-up, to Pope Francis, for Time Magazine’s Person of the Year. Edie passed away peacefully on September 12, 2017. She is survived by her second wife, Judith Kasen-Windsor.

JOSHUA LYON (co-writer) is the author of Pill Head: The Secret Life of a Painkiller Addict and has ghostwritten several New York Times bestselling and award-winning LGBTQ memoirs. He lives in Brooklyn, New York.

A Wild and Precious Life: A Memoir (Hardcover)