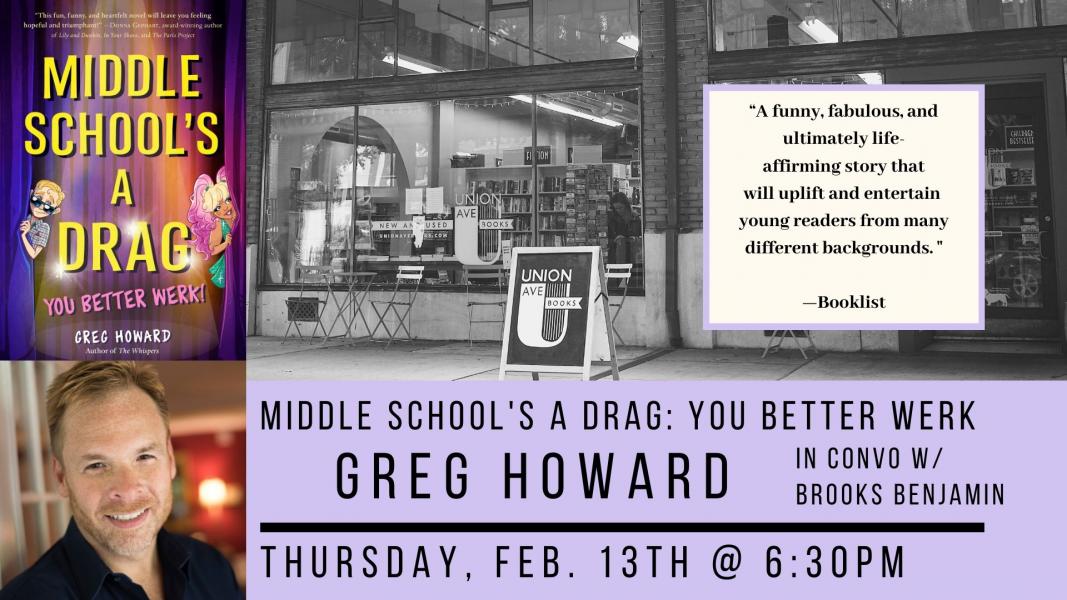 Union Ave Books welcomes author Greg Howard back to Knoxville on Thursday, February, 13th at 6:30 pm for the release of his book MIDDLE SCHOOL'S A DRAG. Greg will be joined in conversation by Brooks Benjamin, author of MY SEVENTH GRADE LIFE IN TIGHTS.

In this heartfelt and hilarious new novel from Greg Howard, an enterprising boy starts his own junior talent agency and signs a thirteen-year-old aspiring drag queen as his first client.

Twelve-year-old Mikey Pruitt--president, founder, and CEO of Anything, Inc.--has always been an entrepreneur at heart. Inspired by his grandfather Pap Pruitt, who successfully ran all sorts of businesses from a car wash to a roadside peanut stand, Mikey is still looking for his million-dollar idea. Unfortunately, most of his ideas so far have failed. A baby tornado ran off with his general store, and the kids in his neighborhood never did come back for their second croquet lesson. But Mikey is determined to keep at it.

It isn't until kid drag queen Coco Caliente, Mistress of Madness and Mayhem (aka eighth grader Julian Vasquez) walks into his office (aka his family's storage/laundry room) looking for an agent that Mikey thinks he's finally found his million-dollar idea, and the Anything Talent and Pizzazz Agency is born!

Soon, Mikey has a whole roster of kid clients looking to hit it big or at least win the middle school talent show's hundred-dollar prize. As newly out Mikey prepares Julian for the gig of a lifetime, he realizes there's no rulebook for being gay--and if Julian can be openly gay at school, maybe Mikey can, too, and tell his crush, dreamy Colton Sanford, how he feels.

Full of laughs, sass, and hijinks, this hilarious, heartfelt story shows that with a little effort and a lot of love, anything is possible.

ABOUT THE AUTHOR (S)

Born and raised in the South Carolina Lowcountry, Greg Howard's love of words and story blossomed at a young age. Originally set on becoming a famous songwriter and following that dream to the bright lights of Nashville, Tennessee, Greg spent years producing the music of others before eventually returning to his childhood passion of writing stories. Greg writes young adult and middle grade novels focusing on LGBTQ characters and issues. He has an unhealthy obsession with Reese's Peanut Butter Cups and currently resides in Nashville with his three rescued fur babies--Molly, Toby, and Riley.

In sixth grade, Brooks Benjamin formed a New Kids on the Block tribute dance crew called the New Kidz. He wasn’t that good at dancing. But now he’s got a new crew—his wife and their dog. They live in Tennessee, where he teaches reading and writing and occasionally busts out a few dance moves. He’s still not very good at it.

Praise for Middle School's A Drag, You Better Werk!:

“A funny, fabulous, and ultimately life-affirming story that will uplift and entertain young readers from many different backgrounds. So, should you check this one out? Mikey says, yas queen!” —Booklist