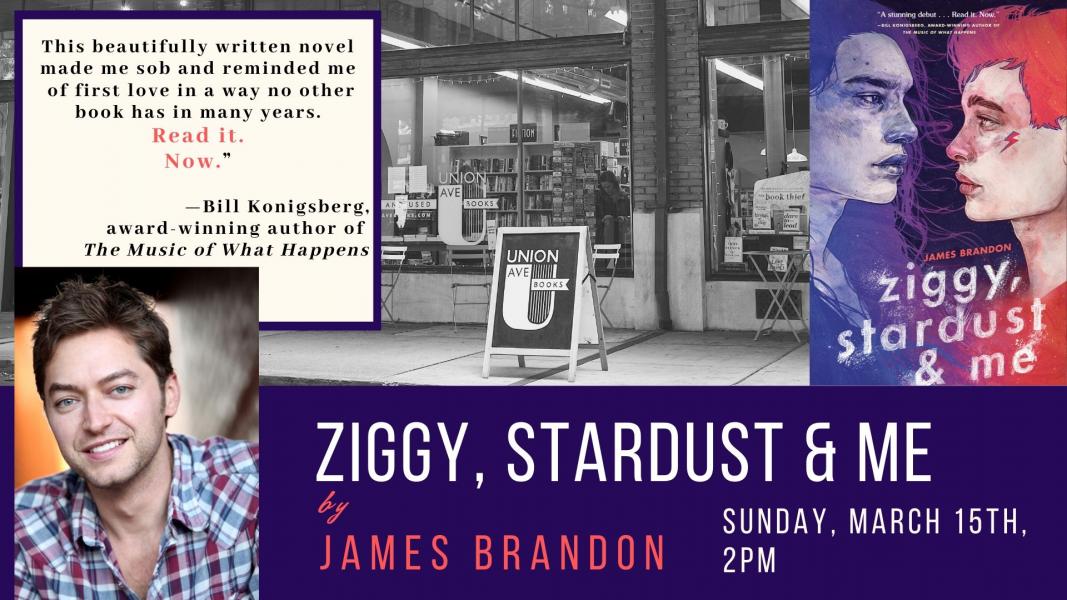 This event has been cancelled since James Brandon's travel plans have been altered by concerns over COVID-19. We will have copies of his book available to purchase.

Union Ave Books welcomes James Brandon for an evening to discuss his book ZIGGY, STARDUST AND ME, Sunday, March 15th at 2:00pm.

A poignant coming-of-age tale, Ziggy, Stardust and Me is set against the tumultuous backdrop of life in 1973, when homosexuality is still considered a mental illness, two boys defy all the odds and fall in love.

In the midst of these trying times is sixteen-year-old Jonathan Collins, a bullied, anxious, asthmatic kid, who aside from an alcoholic father and his sympathetic neighbor and friend Starla, is completely alone. To cope, Jonathan escapes to the safe haven of his imagination, where his hero David Bowie's Ziggy Stardust and dead relatives, including his mother, guide him through the rough terrain of his life. In his alternate reality, Jonathan can be anything: a superhero, an astronaut, Ziggy Stardust, himself, or completely "normal" and not a boy who likes other boys.

When he completes his treatments, he will be normal--at least he hopes. But before that can happen, Web stumbles into his life. Web is everything Jonathan wishes he could be: fearless, fearsome and, most importantly, not ashamed of being gay. Jonathan doesn't want to like brooding Web, who has secrets all his own. Jonathan wants nothing more than to be "fixed" once and for all. But he's drawn to Web anyway. Web is the first person in the real world to see Jonathan completely and think he's perfect. Web is a kind of escape Jonathan has never known. For the first time in his life, he may finally feel free enough to love and accept himself as he is.

“Every character from Jonathan himself down to the ice cream man are fully realized…give this one to budding activists, music fans, historical fiction readers, and romantics. A highly recommended purchase.” – School Library Journal

“A poignant depiction of a boy's journey to accepting his gay identity despite the odds.” – Kirkus

"This heartfelt book will leave you in a puddle of your emotions."– BuzzFeed

“A stunning debut. This beautifully written novel made me sob and reminded me of first love in a way no other book has in many years. Read it. Now.” —Bill Konigsberg, award-winning author of The Music of What Happens

Ziggy Stardust and Me was also named a must-read by outlets like Entertainment Weekly, BuzzFeed and Refinery29.

James Brandon produced and played the central role of Joshua in the international tour of Terrence McNally's Corpus Christi for a decade, and is codirector of the documentary film based on their journey, Corpus Christi: Playing with Redemption. He's the cofounder of the I AM Love Campaign, an arts-based initiative bridging the faith-based and LGBTQ2+ communities, and serves on the Powwow Steering Committee for Bay Area American Indian Two-Spirits (BAAITS) in San Francisco. Brandon is a contributing writer for Huffington Post, Believe Out Loud, and Spirituality and Health Magazine. Ziggy, Stardust and Me is his first novel.

You can visit James Brandon at justbejb.com

Ziggy, Stardust and Me (Hardcover)