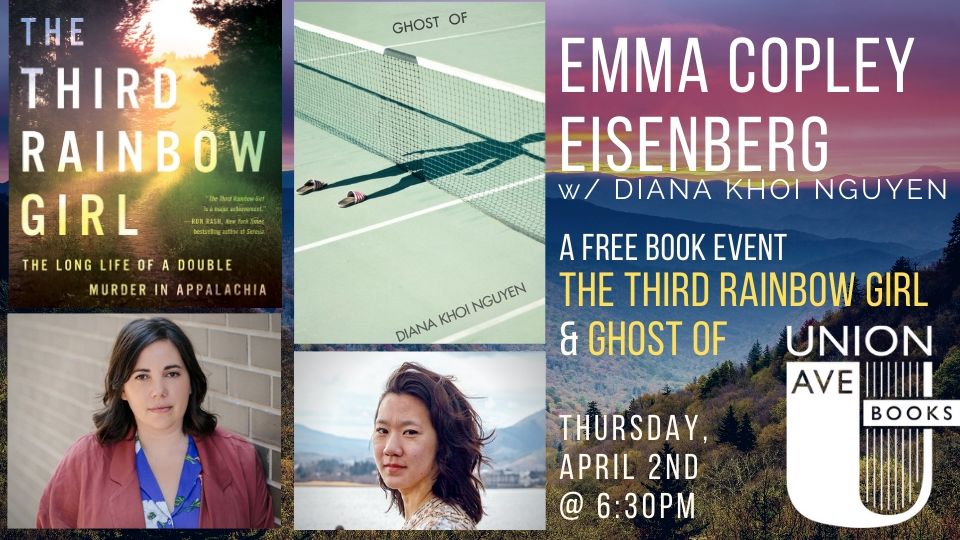 Union Ave Books warmly welcomes Emma Copley Eisenberg along with Diana Khoi Nguyen Thursday, April 2nd at 6:30pm.  This evening, both Eisenberg and Nguyen will share from their newest books, THE THIRD RAINBOW GIRL and GHOST OF.

ABOUT THE THIRD RAINBOW GIRL: THE LONG LIFE OF A DOUBLE MURDER IN APPALACHIA

A stunningly written investigation of the murder of two young women–showing how a violent crime casts a shadow over an entire community.

In the early evening of June 25, 1980 in Pocahontas County, West Virginia, two middle-class outsiders named Vicki Durian, 26, and Nancy Santomero, 19, were murdered in an isolated clearing. They were hitchhiking to a festival known as the Rainbow Gathering but never arrived. For thirteen years, no one was prosecuted for the “Rainbow Murders,” though deep suspicion was cast on a succession of local residents in the community, depicted as poor, dangerous, and backward. In 1993, a local farmer was convicted, only to be released when a known serial killer and diagnosed schizophrenic named Joseph Paul Franklin claimed responsibility. With the passage of time, as the truth seemed to slip away, the investigation itself caused its own traumas—turning neighbor against neighbor and confirming a fear of the violence outsiders have done to this region for centuries.

"Emma Copley Eisenberg has written a true crime book that brings to mind Truman Capote's masterpiece In Cold Blood: elegantly written, perfectly paced, and vividly realized people and places. Equally impressive is her refusal to condescend to the inhabitants of the Appalachian community where the crimes occurred. The Third Rainbow Girl is a major achievement."

“Ghost Of elegizes a brother lost via suicide, is a mourning song for the idea of family, a family haunted by ghosts of war, trauma, and history. Nguyen’s debut is not an exorcism or un-haunting of that which haunts, but attuned attention, unidirectional reaching across time, space, and distance to reach loved ones, ancestors, and strangers. By working with, in, and around the photographs that her brother left behind (from which he cut himself out before his death), Nguyen wrestles with what remains: remnants of memory, physical voids, and her family captured around an empty space. Through lyric meditation, Nguyen seeks to bridge the realms of the living with the dead, the past with the present. These poems are checkpoints at the border of a mind, with arms outstretched in bold tenderness.”

PRAISE FOR GHOST OF

“Ghost of by Diana Khoi Nguyen wrestles with what remains in the wake of a death in the family. Nguyen’s work is neither an exorcism nor an unhaunting, but a mourning song that reaches across time, space, and distance toward loved ones, ancestors, and strangers.”

She is the recipient of fellowships or awards from the Tin House Summer Workshop, the Elizabeth George Foundation, the Wurlitzer Foundation, the Millay Colony for the Arts, & Lambda Literary. Her short fiction has been awarded a Pushcart Prize and been distinguished three times over by the Best American Short Stories series and her nonfiction has been included in Longreads Best Crime Reporting 2017 and won awards from the New York Association of Black Journalists and the Deadline Club.

Her first book of nonfiction is The Third Rainbow Girl: The Long Life of a Double Murder in Appalachia (Hachette Books).
She lives in Philadelphia, where she directs Blue Stoop, a hub for the literary arts.

Born in Los Angeles, Diana Khoi Nguyen is a poet and multimedia artist whose work has appeared widely in literary journals such as Poetry, American Poetry Review, Boston Review, PEN America, and The Iowa Review, among others. A winner of the 92Y’s Discovery / Boston Review 2017 Poetry Contest, she is a PhD candidate in creative writing at the University of Denver.

A poet and multimedia artist, Diana Khoi Nguyen is the author of Ghost Of (2018), which was selected by Terrance Hayes for the Omnidawn Open Contest.

A Kundiman fellow, she is currently a writer-in-residence at the University of Tennessee at Knoxville and teaches in the Randolph College MFA.

The Third Rainbow Girl: The Long Life of a Double Murder in Appalachia (Hardcover)